February has been a full one and this newsletter just made publication on the last day of this leap year month.... whew!
I'm in Houston currently and I just delivered a 6 1/2 foot commission for a private collection. Thanks go out to the clients and Arden's Gallery for making it all possible.
I am happy to announce my one person show at the Mirada Gallery. Friday, May 6, 6-9pm. The exhibition will be in Mirada's captivating, log cabin gallery space in the foothills a few minutes west of Denver. Mirada Fine Art, 5490 Parmalee Gulch Rd, Indian Hills CO 80454  map  (303) 697-9006. I'll be very busy in the studio making exciting works for this exhibit!
New Works:

A new oil commission is underway, two oils went to a private collections (below) and a number of limited edition giclees have been placed in private and public collections including the Bridgeport Hospital, Bridgeport, CT. Thank you for your support and interest in my works.

Trees in Half Shade
Oil on canvas, 36 x 36
Private collection

Wood at the Lake II ( from the original oil)
In three sizes, total edition of 195, plus 15 artist proofs.

There now are over 90 giclee images available in 3 sizes from $300 - $890. These signed, limited edition giclee prints are also available in custom sizes, with or without borders on paper and on canvas.
View all of the giclee images here

At the Denver International Airport

Should you find yourself at the Denver Airport, take the time to view my work and those of my gifted Expand artists / collogues reproduced in the Main Terminal. You will see the images between the baggage claim areas and behind the car rental counters. This “Here to There” themed display was curated by the DIA Art and Culture Program. The airport desired more color in the main terminal spaces and happily, we were allowed to use it as our playground. Many thanks to my fellow artists and everyone that made this possible!
Our EXPAND artist group is comprised of five artists from the Denver metro area: Victoria Eubanks, Janice McDonald, Carol Ann Waugh, Mary Williams and myself.

From the February 2016 workshop in Boulder

Making it Fine Art Workshops in Boulder, Colorado this March and MA in September and CO to be announced, 2016. The Jan and Feb Boulder classes filled before I could announce them here, but there are 2 openings left for the March 19-20 date. Here's a photo from the February class just completed. $390 per person.

Marshfield, MA Sept 9-11 and Falmouth, MA Sept 16-18 venues are now taking registrations. It is an amazing time of the year to be on the East coast and I hope to see you there!
complete info and registration

After each art Workshop there will be a free lecture / book signing of Ken's new book, Manifesting 123 and you don't need #3. The lecture is open to the public.

Great things happen in these Fine Art Classes and it is information that will last for a lifetime.

A recent Workshop in Ken's studio, an ambitious 2 days!

A Survey of Paintings and Prints at the PACE Center
with works in oils, pastels and monotypes. This exhibition catalog can be purchased online here.
30 color pages and text by the artist. $10 plus $4 postage.

This large coffee table book reprises 25 years of my works in oil, pastel, monotype, etching and collage.Large, coffee table hardback version, 11 x 13 inches, 94 color pages with essays. Book and a signed giclee print of the cover image: $150 or just order the book for $115.

Also available as an i-book / download on Apple devices for $9.99. You can preview the complete book and how to order your electronic or hardback versions from my website.

My Blog, For the Color

Want to follow along in my studio?
Come across some interesting art bits and intriguing posts from elsewhere? Check out my artist's blog: For the Color and on the right of the blog under Followers, click Join this Site. Right now you can view vintage videos of Renoir, Degas, a Piet Mondrian video montage, comments about my works and observations about museum artworks from some recent trips.

View my newest artworks:
This monthly newsletter is the best way to stay up to date with my new works and events. You can also follow me on Facebook and go more in depth with my blog, For the Color. To view the total of my works in all media and in all my galleries, go to www.kenelliott.com

Thank you,
Ken
Posted by Ken Elliott at 12:44 PM No comments: 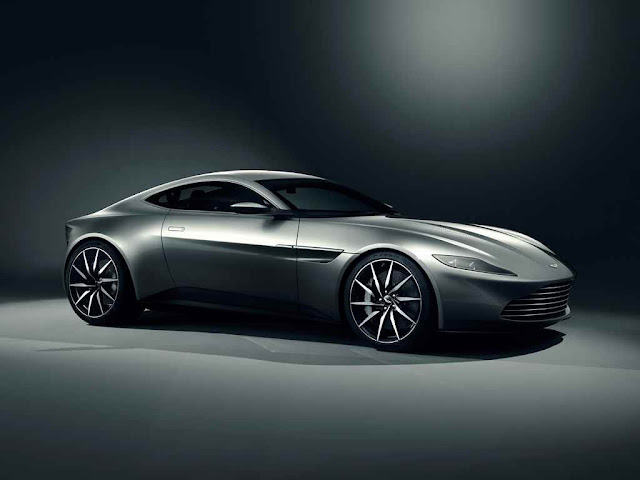 The big art auctions are very interesting to watch. Heck, it's fun to watch just about any big auction. Here's an interesting example with proceeds going to Doctors Without Borders.
Ken

The first part of Christie’s charity auction of James Bond Spectre memorabilia realised £2,785,500, with ten star lots attracting bids from 25 countries across four continents. The sale was led by 007’s Aston Martin DB10, the top lot, which sold to a bidder in the saleroom for £2,434,500, after four minutes and 42 seconds of competitive bidding.

More about the auction

Posted by Ken Elliott at 1:02 PM No comments:


In the past I have done some smaller works on wood panels. The surface is smoother and it takes the paint of the brush differently, keeping me off-balance.

Last week I made a few starts, all the same size on this theme. They all have different color combinations and they look pretty rough right now. Happily this is the first to thread the needle and become a finished work.

I'm looking forward to seeing how those other starts end up - I have no idea where oils will go but along the way some very interesting effects and colors will present themselves. It is a real joy to work with the paints this way.... more of these small panels are in my future...
Posted by Ken Elliott at 7:00 AM No comments:


I've been thinking about this oil for about a year now. In early 2014 I painted a 48 x48 version and ever since I've wanted to do it again as a brighter and larger horizontal.

Doing another version doesn't necessarily make it any easier. I did have that earlier template as a roadmap but happily there were some problems to solve along the way. Each difficulty required solutions that took the painting down another path, adding uniqueness to the new version.

Problems came up right away with the background. There is a lot of space running from left to right and to keep it interesting, three ideas were brought into play. The appeal of that original oil was the glowing blue field and it was the primary reason I wanted to do this bigger version.

Once the blue background was in, the painting was insisting on more interest and complexity. After a couple of weeks experimenting with different ideas a simple solution presented itself. I tried painting in a considerable amount of background yellows on the right, covering about half of the background. It was just too much yellow, so on the left I added a hint of barely discerenable trees with the reds and purples.... too much again.

After letting it all dry, I began again by putting the middle blues back in place and carefully watched what effect it was having - a lovely blue haze was appearing. Once I used the blues to subtract the yellows on the right, a nice solution presented itself. I let the blues outline the yellows and submerged the blues into was was becoming hints of foliage into the left.

It is difficult to see here, but I made sure that the yellows on the ground were different from those in the background.

Once the top trees had the mass and weight they required, I added a variety of colors to provide interest with hints of ambient and direct light in that upper mass.

After starts, stops, dead ends, solutions and and hundreds of marks, these delicate trees came to life, surrounded by a glowing blue haze. It was nice to put it into the frame and watch it breathe and glow.
Posted by Ken Elliott at 9:49 PM No comments: 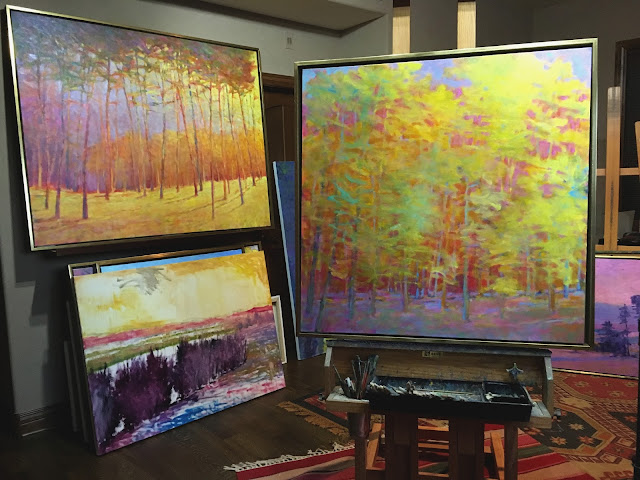 It is a great advantage to work on more than one canvas at a time. There are four others in progress not pictured here, including a 40 x 56" commission. All 7 of these canvases are still in play with each  other, calling out for attention and wanting the improvements just added to at the other. It is quite the conversation and in the end, all the canvases find solutions in ways that would not have been possible without the chorus of suggestions from the other artworks in the studio at the time.

I hope to see you there!
Ken

Posted by Ken Elliott at 4:56 PM No comments: