One evening in 1968, Mark Rothko regaled the art dealer Arne Glimcher, who had dropped by his studio on his way home from Pace Gallery in New York, with the story of a visit from a collector that day.

Pointing to an enormous painting of dark blue and black rectangles floating on a deep burgundy field, Rothko, the Abstract Expressionist painter, described offering his work to the woman, who had been pestering him for a canvas. “Mr. Rothko,” she had said with disappointment, “I want a happy painting, a red and yellow and orange painting, not a sad painting.” Amused, Rothko had responded: “Red, yellow, orange — aren’t those the colors of an inferno?” The woman left empty-handed.

The memory of this exchange now has inspired an exhibition that Mr. Glimcher hopes will “disprove the prevalent interpretation” by many critics, collectors and viewers that Rothko’s brilliantly colored paintings of the 1950s were sunny and joyous, while his darker-palette works in the 1960s reflected his progressing depression and foreshadowed his suicide in 1970.
“There wasn’t a dichotomy,” Mr. Glimcher said. “Mark said many times he felt that tragedy was the only theme noble enough for art.”

“Rothko: Dark Palette,” opening Friday at Pace Gallery on West 25th Street, is the first large-scale exhibition to trace this artist’s experimentation with darker values of rust, burgundy, charcoal, blue, gray and black, beginning in 1955. “These paintings are as spectacular as rare night-blooming flowers, and they don’t come just at the end of his life,” Mr. Glimcher said. 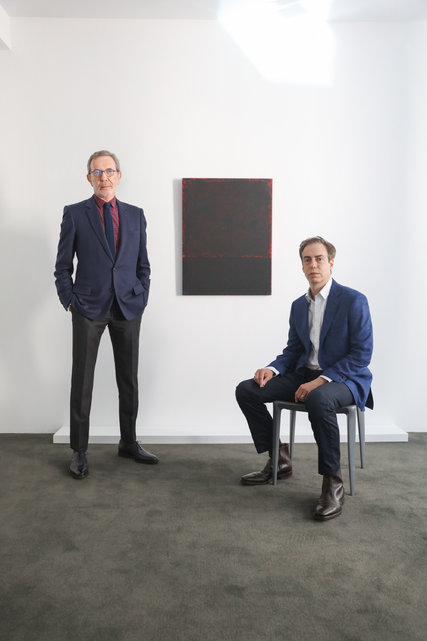 In fact, Rothko’s last complete series, in 1969, featured pastels — pink and beige, baby blue and white and gray — and the unfinished painting at the time of his suicide was shades of dazzling red.

According to Mr. Glimcher, Rothko was striving to communicate something universal about the human condition rather than about himself, and he didn’t paint when he was depressed. “Painting was a positive, exulting experience for him,” Mr. Glimcher said.

Yet the perception that Rothko’s somber palette reflected personal angst is entrenched. In her book “Mark Rothko: Subjects in Abstraction” (1989), Anna C. Chave wrote: “His friends and acquaintances have recalled that by the late 1950s, Rothko was increasingly depressed. They have speculated, too, that his beclouded emotional state was instrumental in the darkening of his palette.” A review last month in Time Out of “Abstract Expressionism,” on view at the Royal Academy in London, referred to “a ridiculously depressing late Rothko.”

Alison de Lima Greene, the curator who oversaw the Rothko retrospective at the Museum of Fine Arts in Houston last fall, said the dark paintings “are in for a reappraisal.” She was surprised when a friend recently suggested that the 14 black murals at the Rothko Chapel in Houston were “all about his death,” because these works were begun in 1964, years before his suicide at the age of 66. Dark doesn’t equal melancholy, she said, “or if it’s melancholy, it’s closer to the melancholia of Albrecht Durer, which is a contemplative state rather than a nihilistic one.”

Scholars including David Anfam have written about how tragic subject matter was something Rothko felt compelled to address in the wake of constant war and the destruction of every Jewish household in his native Latvia. He was haunted by depression. As early as 1949, the year he found his signature format of painting bands of radiant color in dynamic tension, Rothko wrote to the painter Clyfford Still: “This has been the darkest winter of my life — why and what I hardly know myself. … Ironically enough my pictures have never been more ecstatic. People will say what a cheerful guy I must be.”

His mental strife became more acute after his collapse in April 1968 from an aneurysm caused in part by hypertension. His health suffered as well from chain-smoking, heavy drinking, marital strife and years of working with the toxicity of turpentine, the fluid he used to thin the oil paint that stained his canvases in diaphanous layers of color.

On medical advice, Rothko shifted to working with acrylic on paper, in deep browns and grays, burgundies and greens. “He was at this tumultuous stage in life, and yet he was doing the most incredibly disciplined work possible,” Ms. Greene said, noting that people had trouble wrapping their heads around the change. “There was just a cloud of misunderstanding around the work. They were meant to be eternal. They were meant to push boundaries of perception.”

Mr. Glimcher was 25 when the sculptor Louise Nevelson took him to a Chinese restaurant to meet Rothko in 1963. “He knew I was frightened,” Mr. Glimcher said, recalling how the illustrious painter kept putting food on his plate and encouraging him to eat. “When we left, he said, ‘You don’t have to call Louise to visit my studio, just come by.’” Mr. Glimcher did just that, and when he opened his New York gallery that year, he dreamed of showing Rothko’s work.

Rothko was under contract with Marlborough Gallery in his lifetime. After his death, his daughter, Kate, successfully sued to have the paintings returned to her and her brother, Christopher. Marlborough, during lengthy court proceedings in the 1970s, was found to have underpaid Rothko for his work. At the trial, Mr. Glimcher testified that he had agreed to pay Rothko $35,000 per work in 1968 for a proposed exhibition — one that Rothko then backed out of under pressure from Marlborough, according to Mr. Glimcher. He later learned that price was almost three times more than what Marlborough had been paying Rothko for paintings.

In 2012, Christie’s New York set an auction high for Rothko of nearly $87 million for his 1961 canvas “Orange, Red, Yellow.” “That was your quintessential very bright, beautiful Rothko, which brought to the table this feeding frenzy of top collectors from different countries,” said Brett Gorvy, chairman of postwar and contemporary art at Christie’s. He said there is a “huge difference in the number of people” who go for vibrant Rothkos versus dark Rothkos, which he called “a much more limited market.” 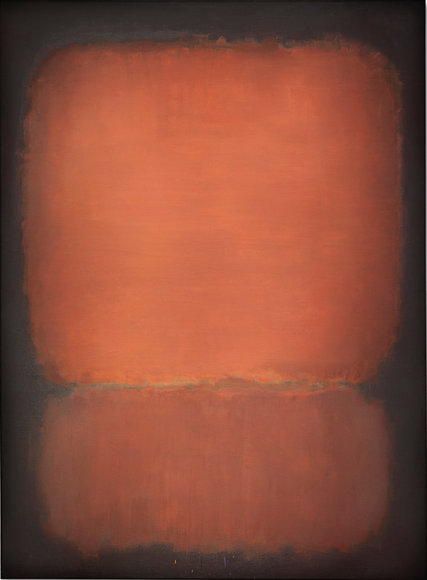 Yet two aggressive bidders last year at Christie’s New York ran up the price on a dark Rothko, two luminous rust-colored clouds titled “No. 10” (1958), achieving almost $82 million and surprising many who had questioned its commercial potential, according to Mr. Gorvy. He said that the specter of Rothko’s depression can both hurt the salability of the dark pictures and add to their romantic lure but that their marketability ultimately comes down whether there is “an inner light to its darkness.” He added, “That’s what a great Rothko has.” 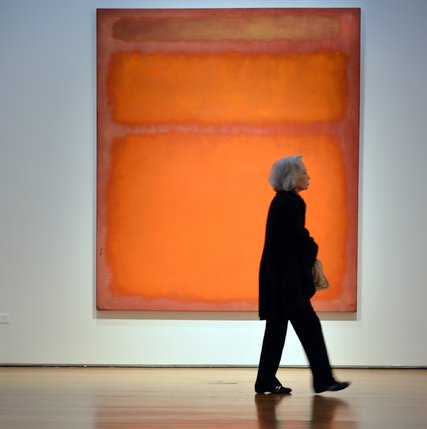 Given the occasion of the Pace exhibition, the Sotheby’s head of contemporary art, Grégoire Billault, said the timing was good to bring back a dark green and gray oil on paper by Rothko from 1969 that failed to sell three years ago there with an estimate of $6 million to $8 million. It will now be offered at the contemporary evening sale on Nov.17 for $3.5 million to $4.5 million. “I’m sure this show will have an impact,” Mr. Billault said. (Mr. Glimcher said he does not have a financial arrangement with Sotheby’s for this work.)

Mr. Glimcher has worked closely on the new exhibition with Rothko’s children. They have lent multiple works, including a 6-by-15-foot mural from 1959 in rust and brown that was part of his canceled commission for the Four Seasons restaurant. Only a couple of smaller works on paper will be offered for sale. (The gallery declined to give prices.)

Christopher Rothko, who manages his father’s legacy, believes his father began darkening his palette in part as a “corrective.” “When the public really started to embrace those brightly colored works,” he began to worry that they were “too easy and people weren’t understanding the more serious emotional push-pull underneath the color combinations,” Mr. Rothko said.

He also thinks the dark palette was his father’s invitation for viewers to lose themselves in the subtler perceptual effects. The dark paintings offer “a more meditative type of experience,” he said. “First and foremost, we want to make a show that is simply beautiful in a very quiet way.”
Posted by Ken Elliott at 12:19 PM No comments:

Here is a recently completed oil that evolved in the studio over a period of many months. Find out more about it in the video below.
Ken

Posted by Ken Elliott at 9:43 PM No comments:


I am pleased to announce that I am now represented by the prestigious Saks Gallery, Denver's premier art gallery for over 50 years.

You are invited to our upcoming group show, The Greatest Gift A Celebration of the Holiday Season.

Here are the new works in the exhibit

Posted by Ken Elliott at 7:36 PM No comments:

Interactive art feature: Are You Smarter Than a Billionaire?

Are You Smarter Than a Billionaire?

Fine art auctions are fascinating places. Have fun with this.
Ken 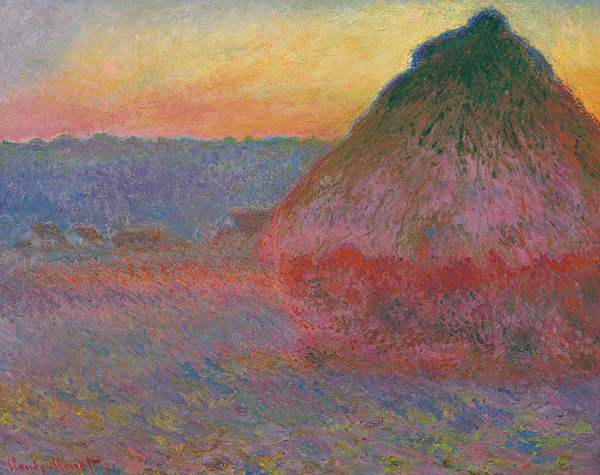 Via Christie’s
A radiant painting by Claude Monet sold for $81.4 million at auction on Wednesday night, just one of hundreds of artworks that have changed hands during this week’s big auctions in New York. But even if you can’t pony up $22 million for a Gerhard Richter work owned by Eric Clapton, you can see how you would match up against art-world insiders below. RELATED ARTICLE
Posted by Ken Elliott at 11:47 AM No comments: