This was a very enjoyable endeavor. This oil is very freshly done, starting with two sessions of turped-thinnned paint. 5 feet square is a lot of area to cover, so using the thinned oils in the first two painting sessions allowed me to completely fill in the canvas and put the composition in a good place for a finish.

This canvas is extrapolated from a previous one, Winters Morning 36 x 48, that just sold last week. As it turns out, the 3 x 4 foot canvas was something of a sketch for this larger one.

I did a video of that oil explaining how I painted over an older canvas with a newer idea. You can view the earlier blog about the oil and video here.

Being an artist is a real privilege and the joy flowed into these works.

Posted by Ken Elliott at 9:20 AM No comments:

My sincerest thanks to the collector that took this home.

This is the first of a series of paintings using this scene.
In this painting the sun is apparent but it is not having a big effect on the light and color in the scene.

All of the colors are in a natural palette with the exception of the purple foothills and some of the low foliage in the background. I set out to do something peaceful, with a limited amount of color and each color in it's own distinct place.

It was a purposeful exercise, much like keeping your peas and carrots from touching on the dinner plate.  In the end, each separate element is comfortable in the scene with the others. Interesting how the greens made it all come together... those were the last colors applied.

You can view more versions of this oil and all of my works on my website.
Ken
Posted by Ken Elliott at 10:13 AM No comments:

A special thanks to the Dallas collector that had this delivered in time for Christmas!
Exhibited at the Arden's Gallery, Houston

Here's a bit about the painting from my earlier blog post:

I am always drawn to the calming interaction of land and water at the lake. This oil was made from a photo and it contained considerably more detail - nice to have it, but the point of the oil is simplicity.

Rather than use the colors of the photo, I opted for a tranquil, blue effect. There are a lot of blues here and they are limited to certain parts of the painting in order to preserve their power and unique effect.

It took a lot of tweaking to bring it all together. The pinks at the foreground went in first, an off-balance move to set things in motion, a small risk.

Once the oil began to take shape, lights and darks were increased for depth and interest. Just a touch of green and the red/darks provided a sense of realism to the right land form, setting it apart from the etheric left side. From there it was a matter of setting up the various blues, some receding, others glowing to bring the oil to life.

In the end, the aquas slightly glimmering in the water and the yellow / purple sky in the far distance lift the somber blue mood and allow the eye to move through the scene.
Posted by Ken Elliott at 9:20 AM No comments: 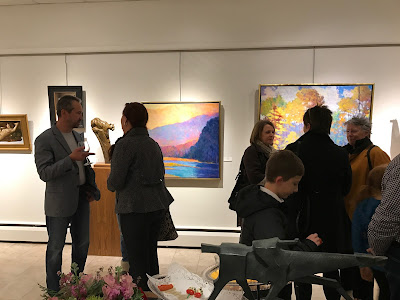 Opening Night Exhibit at the Saks Galleries, Denver
Friday, December 18, 2017
Opening night exhibits are always a lot of fun! Here are some photos from the opening night. It was a great success with my largest oil, Forest with Yellows and Reds, sold days in advance. It's not on the wall for the opening but hanging in the home of the new owners (thank you VERY much!)

You can view Forest with Yellows and Reds, 48 x 60 inches from this earlier blog post
Although it was a cold night, a big crowd arrived and they were welcomed by the gracious owners Mikkel and Catherine Saks with Becka and Leanna... a great evening!
After the exhibit it was a thrill to walk out into the falling snow with the Christmas lights everywhere. 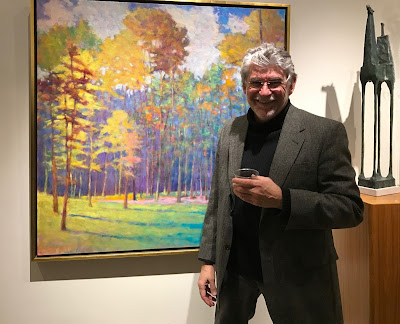 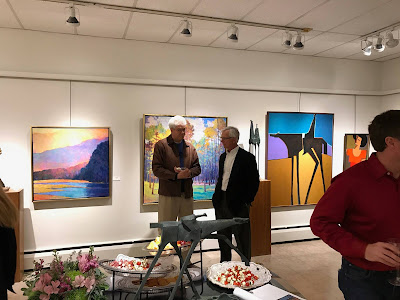 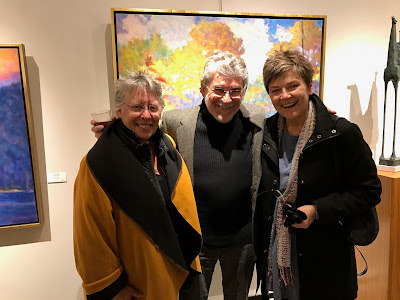 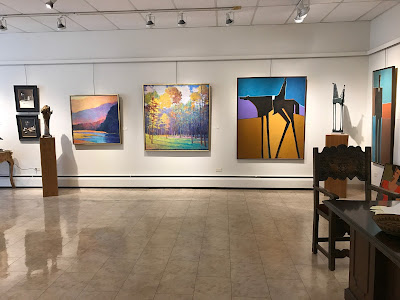 Posted by Ken Elliott at 6:12 PM No comments:

Thanks to everyone at Saks Galleries for placing this painting.

You are invited to my upcoming group show, The Greatest Gift A Celebration of the Holiday Season.

Here is a video about how I decided to use an older oil, Bright Progressions on Yellow (bottom of the page) and overpaint it, creating Winters Morning above.

This is all about moving forward as an artist and taking risks.


The oil started as Bright Progressions above and then became the new oil below. My only plan was to add complexity and to use a grayed down palette. You can see that some of the original oil has been preserved and reimagined.

For years I have recommended having a lot of works in progress, a tip I learned from Wolf Kahn. When he summered in Vermont, Wolf would often make over 100 starts and ship them back to his NY studio for completion.

The 4 x 5 canvas in the upper left has been in the works for most of this year and is almost completed. The 36 square on the far right was started last February and I'm still working on bringing it to a compelling conclusion. Do they always take that long? No, but sometimes it takes a number of studio sessions before the true nature of the canvas reveals itself.

The oils at the lower left and center easel were started this week and I am enjoying the challenge of taking on these subjects in a more abstracted way.

Check out the recent video of Forest Light into Shade, oil on canvas, 48 x 48 inches.

Happy Holidays!
Ken
Posted by Ken Elliott at 10:16 AM No comments: