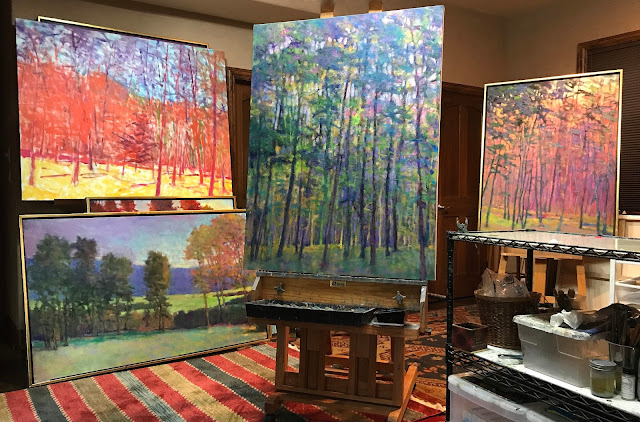 It is a pleasure to walk into the studio and see a number of works in progress. Working on multiple canvases greatly reduces the pressure of trying to make an individual oil come together in some perfect way. Instead of rushing and stressing, the many works benefit from an extended time of contemplation and experimentation.

Two of these works, the 3  x 5 foot on the easel and on the one on the floor are new starts, painted directly over an older idea that wasn't working. In both cases, these new starts are quite different from the underlaying image and I felt free to work right over an idea that was a struggle. Having a lot of canvases in play is liberating... everything is up for change, sometimes radically. No single canvas or section of the oil is precious.

The upper left canvas is 4 x 5 foot, a new start from last week and the oil on the right was started as a demo in my art class a couple of months ago.

These canvases proceed in a steady but non-linear way and everything is up for grabs. All is in pursuit of the best possible outcome, a compelling work of art that is successful on a number of levels. Along the way, many experiments in color, light, contrasts, etc are tried out. It appears that a lot of mistakes are being made and sometimes that is the case, but this is really an efficient way to take these works into new and unpredictable territory.

There is always intrigue in the studio with the paintings communicating their present needs and dreams of greater things. Strategies will be pursued and because this process welcomes surprises, thrills will often result.


This oil was completed last fall and seeing the photo here takes me back to viewing it on the easel again. ... so many moves and marks to make it come to life.

Thank you Saks Galleries, Denver, CO and to the collector that hung it over the fireplace.

Please review my comments about this oil in an earlier blog post.

First off, thank you Lynn for your sunset photo.

This finished oil is a cropped-down and brighter version than the source photo. My intent was to create a large sunset oil without too many of the cliche light effects. This work is almost pure composition and color.

I got off to a good start with this one and on the second session a number of different blues, reds and oranges went into clouds. Then I did the same with the land below by adding a variety of unusual colors. The composition was still in place but now a considerable amount of unnatural colors will have to be dealt with. During this second session it became apparent that the big cloud form was going to need a lot of work to keep it interesting in every direction, all 3 by 4 feet of it, presenting a new challenge to make it happen.

During the second session I purposely departed from the blacked-out land area and the big "God light' vertical streams in the photo. Instead I painted in an abstracted scrub landscape at the bottom and opted out of the upward light streams, the "God light" as a compositional element. Because the reds and oranges are prominent in this work, I chose a glowing, green field with other colors for green support. Every element in this oil is there to enhance the radiance of the clouds.

The last painting session was primarily two things. First to make the cloud form interesting as it moves horizontally and upward and to do the same for the field as it moves left to right. Then it was about pushing the oil to a more interesting place and perhaps to a finish.

Rather than just adding more bright color, I put in a number of different grey tones because they have the effect of adding complexity as well as making adjacent colors appear brighter. That turned out to be a really good move.

More interest at the edges were added and last, virtually every color on the canvas was given another brighter layer of a similar color, creating glowing effects throughout the scene.

First off, I want to thank Ed Chesnovitch for his great photo of this marsh. Living in Colorado doesn't allow for much marsh scenery, so I am grateful to Ed and the composition he captured.

Ed is a very accomplished Cape Cod artist and I would encourage you to visit his website and sign up for his newsletter.  He is also represented by the Left Bank Gallery in Wellfleet, MA.

I will be teaching a 2 1/2-Day Making it Fine Art / Advanced Strategies nearby in Marshfield, MA August 26-27, 2017. It is sponsored by the North River Art Society.
Register by contacting Peggy Bruno 781-837-8091 or email northriverarts@gmail.com

Open to artists in all media.
Workshop flyer   Complete information on the Workshop page  Contact Ken

About the oil Marsh Tones:

At the beginning of this oil I wanted to use colors I haven't used before and to keep everything fresh. This scene is very atmospheric with a haze everywhere that is also reflected in the water. There is a sun effect in the photo, but early on I decided to play that down.

It was important for me to begin with a variety of colors, not knowing exactly how they would come together. There isn't a lot of visual information here, so the plan was to use color as a key interest. The land and tree masses are essentially three bands of color, so it felt essential to add more chroma in unexpected ways.

As the painting developed it became apparent that the contrasts and clarity in the foreground would be important to this work and as the scene receded, just enough detail was maintained to carry the viewer's interest back to the trees and sky. Since this is a horizontal landscape, care was taken to simultaneously keep it interesting across the entire left to right space as well.

There is much to see here but without high detail and a glow suffuses everything, bringing the oil to life. To make a work with this amount of subtlety is a bit like a minimalist poem with the point clearly made. It is so easy to overwork something like this.

Turns out, this oil will be a prelude for a much larger one beginning this week. I'm really looking forward to revisiting this scene.
Posted by Ken Elliott at 7:45 AM No comments:


Some years ago, I purchased a number of wood panels. The idea was to experiment with more abstracted ideas. As experiments go, some worked out nicely and the less successful ones were stacked in dark corners, waiting for another day and better ideas.

A couple of months ago I pulled the worst out of the stack and painted over it quickly, using less detail but with the same, experimental idea in mind. It was a horizontal band of trees, unbroken from left to right. At least I changed things but still wasn't very compelling. A poor start is not what I needed.

So back in the corner it went, but visible to me every day now. It was a reminder to do better and to get there by any means possible.

Thinking back to my original plan with these panels, I had planned on using whatever oils were on the palette at the end of the day to make some small scale, interesting starts. Instead of throwing the paints out, they could be applied to the panels without a formal plan, creating interesting challenges to work out later.

It was the end of the painting session last week and I had just added a bit of Oriental Green to a large canvas. Looking across the studio, that 24 x 24 panel was calling out for something new and this powerful green might be just the thing.

Bring the panel to the easel, I took the green and quickly put in the dark line of trees, fading it out as it moved downward to the right. It made me smile because I was reminded of the chef on the cooking shows, "Boom." That's more like it!

At the end of a painting session days later, another unplanned move resulted. I was clearing the palette for the day when I noticed I had a good bit of white and yellow left. Putting the panel back to  the easel, I started putting in the right row of trees with that yellow and white.

The light color was picking up a bit of the almost-dry green from the days before and giving the yellow-white an other-worldly glow in places. I decided to play it smart and stopped for the day.

The original painting still showed through in the sky and foreground areas, so I painted over them but not completely, trying out various color ideas. All of the colors experimented with are visible, but to various degrees and it adds a nice complexity. In the sky a pale, acid green was used but it struck the wrong note. However it was very useful as an interesting remnant when overpainted wth the lavender tones. Finally, the oil was finished after a long journey of about 2 years.

I took a little time to go back over the process, took a break and came back to the studio with a pre-stretched 48 x 48 canvas. On to the palette I squeezed out large amounts of Oriental Green and Perylene Black (a green-black), then started work on the bigger version.

Posted by Ken Elliott at 7:00 AM No comments: