Art at the movies: Ken's art appears in the film Concussion 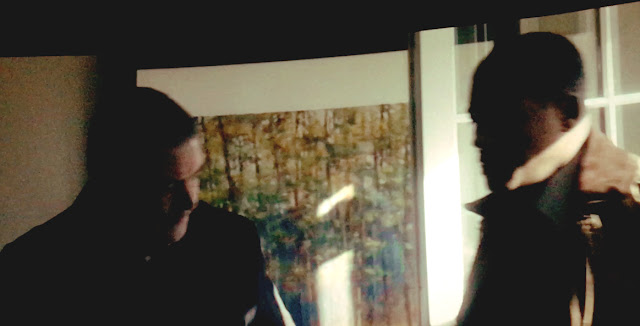 Here is a still from the just released movie Concussion showing Alex Baldwin and Will Smith with Ken's artwork in the background.  (Image: Sony Pictures)
Click to see movie trailer

Well this doesn't happen everyday. I was contacted by the Concussion production company last year to get permission to use my art in their film. I was told about the story line and that it would star Will Smith and Alex Baldwin. I was told that they were filming in a client's home and they wanted to use my existing artwork there.

I was delighted to accept and they paid me a reasonable license fee. You never know if they will use that scene with the art in it but months later on Christmas day I saw the movie and there it was.

The scene is when the two characters, both doctors, talk outdoors at the Baldwin character's home.  Just after the outdoor scene, they enter the home and the artwork is behind them, just inside the entryway. Don't blink or you will miss it. No 15 minutes of fame here. :)

Concussion is a remarkable movie, more than a sports story and one I would heartily recommend seeing.

In Pittsburgh, accomplished pathologist Dr. Bennet Omalu uncovers the truth about brain damage in football players who suffer repeated concussions in the course of normal play.

Disclaimer: No artworks or artists were harmed in the making of this motion picture.