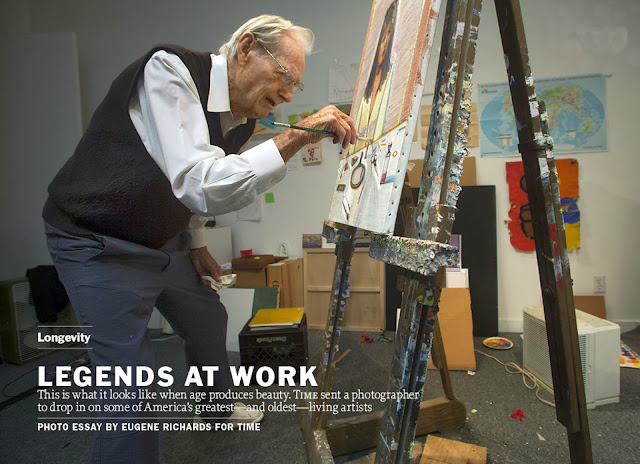 Wayne Thiebaud is one of my favorite artists and this article about artists getting older - much older, is worthwhile and hopeful. I just heard friends singing happy birthday to me just last week. It's an enjoyable ride!  Ken

When Age Produces Beauty: Photographs of Legends at Work

Time Magazine, by Richard Lacayo, art critic and editor-at-large at TIME.
Eugene Richards is an award-winning American photographer. He was recently honored with a second Getty Images Grant for editorial photography.
September 12, 2013 This article with other artist photos

Time is rough on a lot of life pursuits. Athletes dwindle. Dancers pull tendons. Politicians? It varies. But artists, if they work it right, they ripen. Here’s Hokusai, the great Japanese painter famous for his Thirty Six Views of Mount Fuji, in the mid-1830s, puffing out his chest: “Nothing I did before the age of 70 was worthy of attention. At 73, I began to grasp the structures of birds and beasts, insects and fish, and of the way plants grow. If I go on trying, I will surely understand them still better by the time I am 86, so that by 90 I will have penetrated to their essential nature. At 100, I may well have a positively divine understanding of them, while at 130, 140, or more I will have reached the stage where every dot and every stroke I paint will be alive.”

Hokusai didn’t see 140, but he got to 89, and produced some of his best work in later life. That’s not surprising. While art history is full of greats who died early, the truth is that people who make careers of their creative urges more commonly live into a productive old age. For every Raphael or Van Gogh who disappeared in his 30s, there are dozens like Michelangelo and Titian, Degas and Monet, Hopper and O’Keeffe who combed gray hair, working all the while. Artists don’t think about retirement. They’re already doing what they always wanted to do.

With that in mind, earlier this year TIME commissioned Eugene Richards to visit a number of prominent American artists who were in their 80s or about to arrive there. Over 7 months he photographed them in their studios, homes and galleries. What follows are pictures from eight of those encounters, with John Baldessari, Mark di Suvero, Robert Frank, Robert Irwin, Alex Katz, Faith Ringgold, Betye Saar and Wayne Thiebaud.

Keep in mind that the work artists do late in life can sometimes rank among their most influential achievements. Titian is the great example. In his 70s and 80s he virtually invented free brushwork, a flurry of wild strokes that would unlock the firm contours of Renaissance painting and be adopted by artists from Velazquez and Rubens to the 20th century Expressionists. Then there’s Renoir. Over the last decade or so of his life he made scores of peachy, plump nudes. They look a little campy to us now but they fascinated Picasso and Matisse and helped them to rethink the human body. Two decades later Matisse, when Matisse was in his 70s and largely an invalid, he developed the cut-paper technique that led to some of the most powerful and delightful work of his long career – more than that, to a new way to signify pleasure. Having suffered two debilitating surgeries, maybe he just wanted to be the one in control of the blades. That’s another thing about the late ripening of artists, maybe the best thing. Every day, they can just pick up the old tools and take charge.
Posted by Ken Elliott at 8:48 AM