I had this very basic idea of light moving from right to left across two lines of trees along a lake. Once that was painted in I felt pretty good about it. Later that evening I was showing it to another artist online and it hit me that I didn't fully pull it off.

In the course of working on these canvases that is often the case when viewing them later. Improvements can often be made and I was a bit excited about figuring out how. My plan was to make the front line of trees more distinctive than the back row and to add more contrast in the sky in order to heighten the effect of the brightest trees on the right.

First things first - more contrast, so I loaded up some dark purple and quickly brushed it in along the top of the trees. It immediately changed everything! Suddenly the painting had a lot more power and drama.

The second move was a subtle but important one, adding the vertical trees along the front tree line. Now the painting gained complexity but not at the expense of the original idea of simply moving light across the picture plane.

There is only a glancing reference of trees reflecting in the water, just enough to anchor them. Now I felt free to use the rest of the water below for whatever I felt was best for the composition. I wanted more light in the painting overall, so the addition of the modulated yellow band made that happen. I felt it was also important to run that yellow ribbon across the entire canvas. Because the yellow design is wider at the left, it gives the impression of a left to right movement and creates a counter point to the bright yellow trees at the far right. There is a nice complexity in this work but it is understated almost to the point of abstraction.

The trees hold their position as the light moves over them and they are further enhanced by the contrasting color and movements of the sky and water. What was once a wisp of an idea became a real place were the effects of nature can be observed and enjoyed.

Posted by Ken Elliott at 8:48 PM No comments:

Video: How to Make a Gunpowder Painting with the artist Cai Guo-Qiang 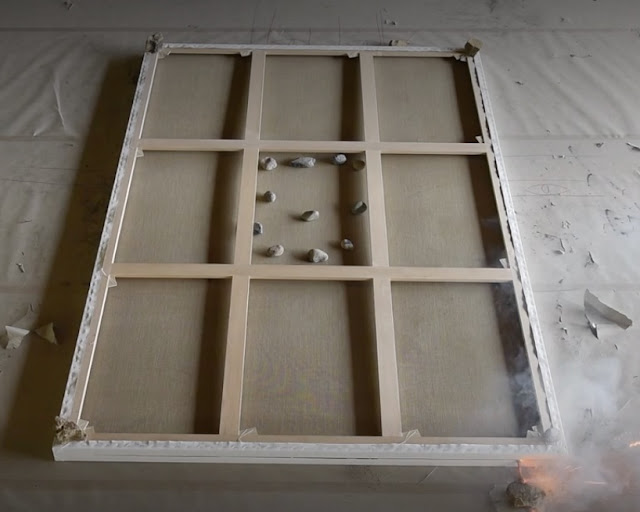 Video from the NY Times by Jason Schmidt

From sketch to explosion, a close look at the artist Cai Guo-Qiang's process.
Since 1984 he has created over 1,000 works with gunpowder.
Posted by Ken Elliott at 9:01 PM No comments:

February 2018:
Reworking a painting by using a a couple of strategies to create improvements.
Here I took a perfectly good oil and reworked it to create a more subtle and elegant effect.

Written in August 2017:
I began this oil (Version I) as a demo for the workshop that Casey Klahn and I put on in 2017. The dark trees in the upper left are just as they were painted in that day. For the demonstration, I wanted to offer the example of a very direct and strong start.

All of these moves were done to improve the painting rather than create a more realistic scene. This is what makes painting enjoyable for me - trying to get more out of the artwork with a variety of strategies.

During the last painting session today the lighter areas began to take the lead. I made the sky brighter and insured that the glow travelled down into the background. Once more light and shadow variations were added to the grasses below, the entire painting fell into place. After a lot of patient trials, this forest came to life with color, atmosphere and in a somewhat abstract way.

I really like those original dark trees with their high contrast and the motion they give to this work.

Forward to Feb 2018:
After seeing in the studio for a time, I decided that I wanted the oil to have more simplicity and a softer light. Trees were eliminated and a softer light emanates throughout the painting. Some of the colors were grayed down a bit and it actually enhanced the effect of the glow. It was a surprising outcome but it was just the effect I was looking for. Greys are very important at times!

As the painting progressed, a path began to form. It is nice to have it there, pointing the way to more good things to come.

More information about my Workshops

Posted by Ken Elliott at 8:31 PM No comments: 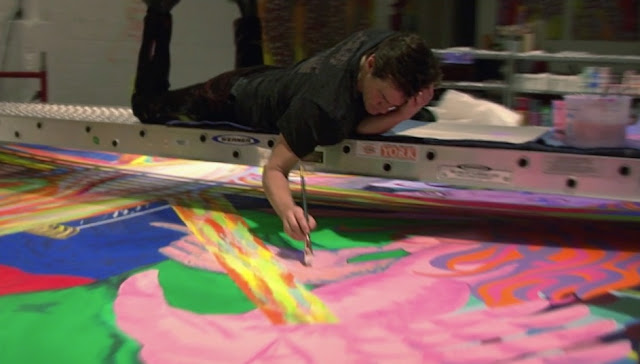 In this 6 minute video, Jim Carrey he discusses much and his works are very revealing. It's always interesting to hear artist's motivations.


For additional information regarding Jim's art please visit: signaturegalleries.com
For all other inquiries email info@befreejc.com
Posted by Ken Elliott at 8:03 PM No comments:


I can assure you, it took a lot of sessions in the studio before any glittering appeared in this oil. The difficult part about painting is to keep it fresh (if that is the goal) and the more time spent on the canvas, the easier it is to loose the spontaneous look. It also increases the odds of any number of bad things happening.

This painting went through 5 or 6 big changes and once the composition came together, I declared it finished, photographed it and declared it a good day.

When I returned to the studio the next morning, it was apparent that something had been lost along the way. As it often happens, I think my just-finished oils are really good until the next day.

That's OK, because it's an opportunity to take the painting further, and I jumped right in with much brighter colors. Since I was painting over a slightly duller background, those brights began to sing! Additional colors were added to the mix and while I was putting on the last strokes, the title came to me, Glittering Forest!

The larger oil is a composition where the color comes first. The light and shadows are unnaturally placed to create more contrast and intensity. Some of the brights are too bright and the shade doesn't always follow the usual contours, given the so-called light source, but it is all part of the theatre.

The entire effect is a bit surreal and intense. As I was painting this it was a bit like throwing on more logs to make a brighter fire. Surprisingly, there is a balance in this but the solution came slowly, over a number of painting sessions. At first the greens and yellows were just too bright, but I didn't want to sacrifice their power. The stand of trees was a bit chaotic as well, so other colors and shapes were added for support: light blues, lavenders, cobalts and the orange foliage.

Finally, everything came together to create the right chord, not one you hear everyday, but it is made to be played loud!