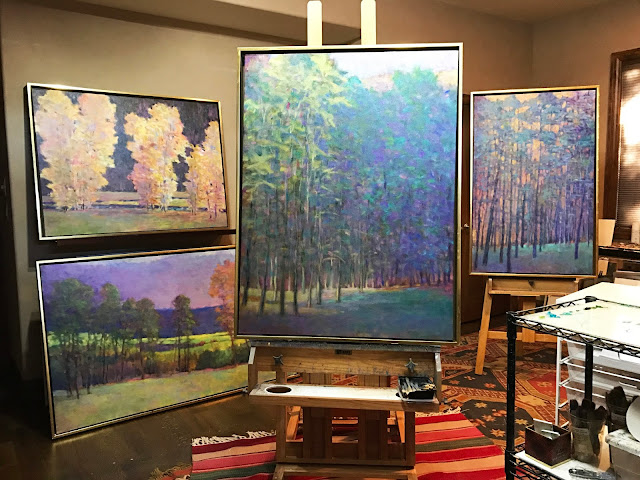 Here are 4 works in progress - I like seeing them in the frames even before they are finished.

Currently in the studio there are nine works in progress and the closest to finishing are the 4 in this photo.

The studio is always an interesting place with plenty to explore and paintings to improve on. To get where I want to go as an artist, I have to push ahead and create more problems - to be in a place where the artwork is full of unknowns and unfinished business. Some require big moves and others small improvements.

I have learned that sometimes the most efficient way to finish a problem painting is to redo it in a very big way. The two oils being redone here are in a far better place than before and it is wonderful to see them further along as more interesting paintings.

Posted by Ken Elliott at 3:53 PM No comments:

For a couple of years I had a canvas in the corner of the studio with a start that never went anywhere. There were trees on the left and right, but it just wasn’t working and the composition needed a fresher start.

So, I declared that today was the day, as I put the canvas on the easel. and after some study, I made a simple plan. The idea was to use a lot of greens and make something interesting from that poor start. Different compositions were tried but nothing clicked until I added the purples to the center of the scene. It was an experiment, but once that color made contact with the canvas, everything else just fell into place. Soon I was tuning the other colors to accommodate that far purple. All was going well.

After putting the oil away for a couple of days and bringing it into the studio again, it was lacking something. Again, just to see what would happen, I put in a few bright lime notes up in the trees and then the birds sang.

Posted by Ken Elliott at 9:06 AM No comments: