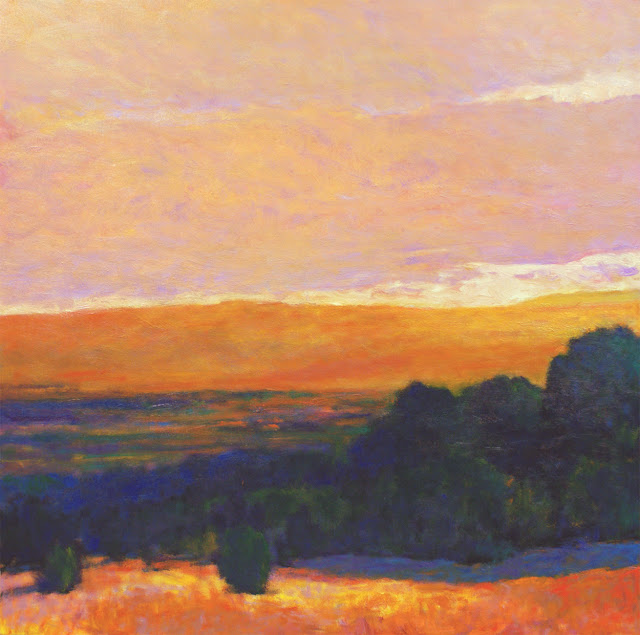 This is an interpretation of the view behind my home and studio. I'm so happy to be free from making a portrait of landscapes. My view barely resembles what you see here. In this oil the colors and contrasts have taken over, bringing the artwork to a dramatic edge.

Here's the best part. I picked up a canvas that was a problem child. It had been sitting in a stack of unfinished canvases for about three years. I put it up on the easel and in fast, broad strokes painted this new image over the old one. It felt great as I covered up that unsolved mess with a bright, new idea. Some of the old came through and created wonderful effects in places, a nice bonus!

Now I have a study for a larger idea and I'm back to the studio to make a bigger horizontal version.
Posted by Ken Elliott at 10:03 AM No comments: 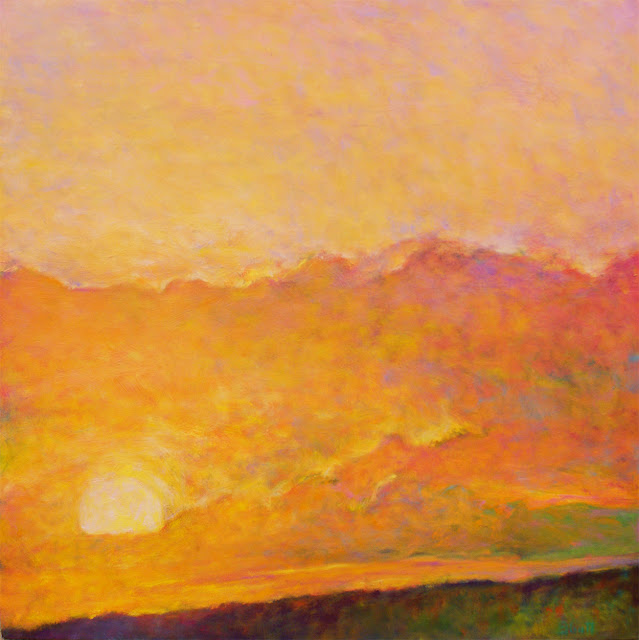 This is a cropped version of a 5 foot sunset painting from months back. I was intrigued by the idea of doing that bright ball in a painterly rather than decorative or illustrative way. It's so easy to do something ordinary out of a sunset. I wanted this oil to really push the color and light.

Once I cropped the composition down from the larger version, I was left with the basic parts of the sunset. Every remaining element would be very important to the overall success of the piece.

From the start, I decided that the overall color would be tangerine but to keep it interesting, a lot of different colors were applied the canvas and remnants of many of those colors remain. This work was done in about 5-6 painting sessions. Each time I returned to the easel the painting was demanding more power, contrasts, glow, etc. It was a very simple composition but it required a lot of moves and attention before it came to life.

It was also very important to just leave it alone between sessions. Sometimes in the busy - ness of working to a finish, a lot of interesting subtleties go unseen and get covered up. It was nice to return to the studio and see those previously hidden notes present themselves. Those little gifts were left in place or used to take the oil further along.

Honestly, it seemed like it would paint itself in the dark of the night at times and surprise me with some positive developments while I was sleeping. If you are watching, the paintings will speak to you as they evolve.
Posted by Ken Elliott at 8:00 AM No comments: 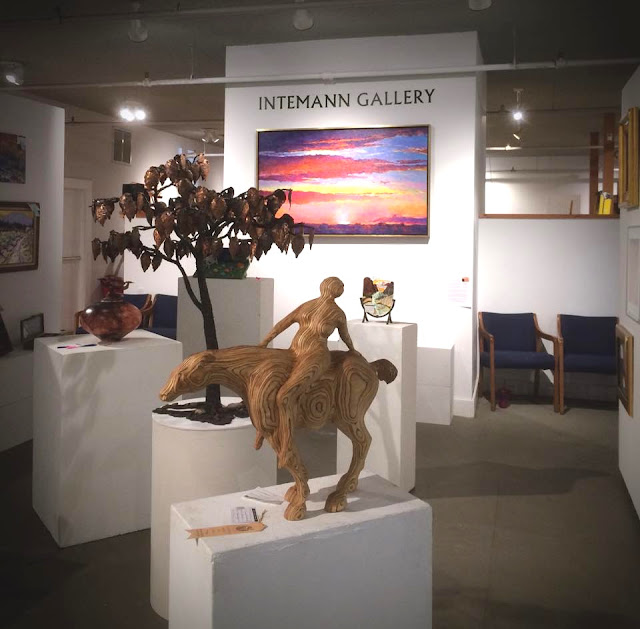 
I hope you can join me for the opening reception of the Colorado Springs Art Guild Regional "Autumn Glances: Juried Show 2015.

I was honored to have been selected to the juror this show. There are over 100 works exhibiting and offered for sale here. Over $1000. in prizes were awarded and the winners will be announced tonight! 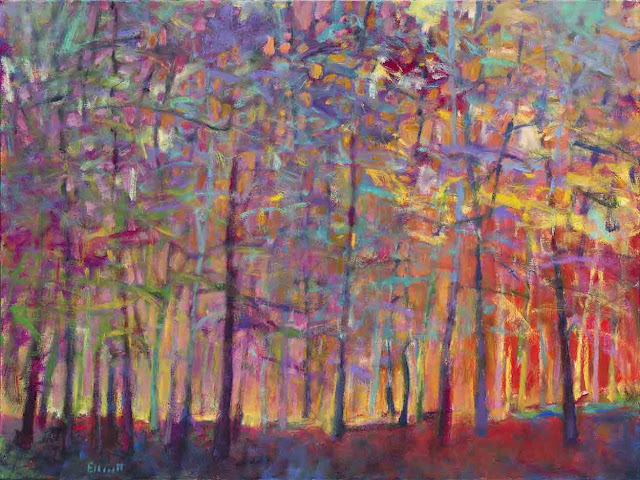 This oil was begun as a painting demonstration during my October 2014 Workshop in Marshfield MA. It is of a favorite motif, a wall of trees. For this quick start during the demonstration I opted for a very dark foreground, middle values in the trees and a lighter background.

Originally the foreground was very dark but once I got the oil back in the studio the foreground needed a lot more interest. Rather than try to represent a forest floor, I layer on the colors, moving them from left to right. I was completely unconcerned about what it should look like - the colors would carry that part of the scene if they were interesting enough. In the end, the bright reds were modulated down with the blues and greens but leaving the glow of the reds.

Once that lower part of the oil was in place with the hot reds, the upper part of the painting looked pretty dull. That's where the fun began. I decided to use arbitrary colors, unnatural choices with the purples and pinks for the foliage.

After adding ''standard' greens along with aquas and turquoise there, something began to happen that made the oil a lot more interesting.

The end effect is a forest scene with a full range of chroma. It took a lot of moves to hold it together and make it sing. I enjoyed the process and patiently let the painting evolve over a period of about 9 months.

My big thanks to the Washington collector!

Article: This algorithm can create a new Van Gogh or Picasso in just an hour

I was just thinking about this possibility last week...
Ken

The algorithm was given this photo of buildings, left, and a copy of Vincent Van Gogh’s “The Starry Night.” In about an hour it taught itself to mimic Van Gogh’s style, and apply it to the photo of the buildings. (University of Tuebingen)
For great artists, creating a masterpiece is the culmination of a career. Years of practice, creative musings and experimentation with styles build up to the genesis of something truly original and timeless.
A story is often told about Pablo Picasso charging an enormous sum for a portrait. The physical act of drawing it took only a few moments, so the subject complained to Picasso. He is said to have responded, “Madame, it took me my entire life.”
While the great art of yesteryear was an exhaustive process to create, today the style of those masters can be mimicked in minutes. Last week German researchers released a paper detailing how a computer algorithm could be used to pump out images borrowing the styles of the world’s greatest artists.

The algorithm took the top left image and applied the style of the small, inset images to create works with very similar styles. (University of Tuebingen)
The paper includes new images that look remarkably like the works of Vincent Van Gogh, Edvard Munch and Picasso. All the images were created in about an hour. As the researchers optimize their work, the images should be able to be produced even faster. Something that was rare and difficult could become quick and easy to create. (The researchers have not publicly released the algorithm yet.)
The findings are the latest out of the red-hot field of deep learning, in which computers identify and classify patterns in huge data sets. The computer’s thought processes are designed to mirror the way the human brain works.
The researchers create their new images by taking one image, such as a bland photo of a row of houses, and another image, a painting from a great artist. They then use what’s called a convolutional neural network to create a new image, in which the style of the great artist is applied to the other photo. Here’s a demonstration of how the network creates the new image. (University of Tuebingen)
“The key finding of this paper is that the representations of content and style in the convolutional neural network are separable. That is, we can manipulate both representations independently to produce new, perceptually meaningful images,” write the authors. Their paper has been submitted to Nature Communications. Leon Gatys, a PhD student at the University of Tuebingen is its lead author.
This is another example of how machines are becoming more capable of matching and exceeding human capabilities. Of course, the machines don’t have a style all their own. They can only copy existing styles. True creativity is a greater challenge that machines have yet to master.

Matt McFarland is the editor of Innovations. He's always looking for the next big thing. You can find him on Twitter and Facebook.
Posted by Ken Elliott at 11:43 AM 1 comment: 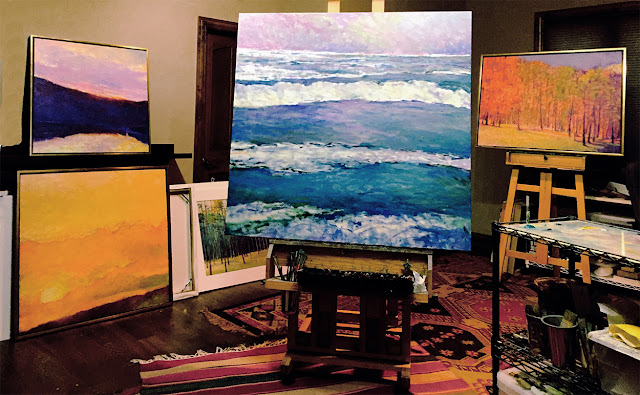 The two small oils are studies for more simpler compositions with more emphasis on color and expression. I'm having a ball creating new problems and working through the possible solutions. 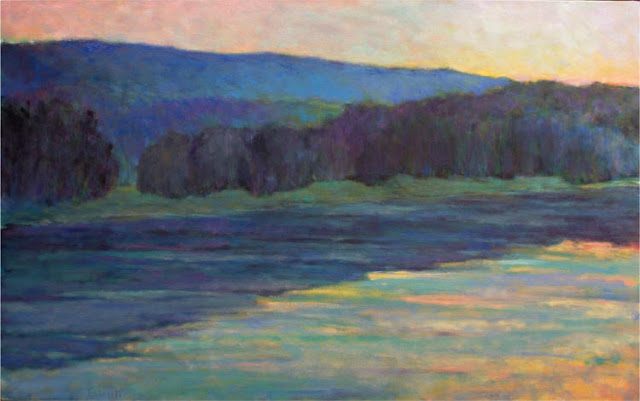 This is a study in blues and a progression of changes. The painting went through a lot of permutations until finally settling into a band of blues surrounded by the lighter colors in reds and yellows. Once the light areas were modulated with pinks, purples and aquas, then all the colors fell into place.

Towards the finish, the blues and yellows were pushed further to create more contrast and interest, making this more of a statement in color and less about form.

I'm grateful to the wonderful couple that purchased it for their collection, adding it to an earlier pastel they acquired. It was a joy to have them in the studio and have them take this painting home.
Thank you!
Posted by Ken Elliott at 12:01 PM No comments: