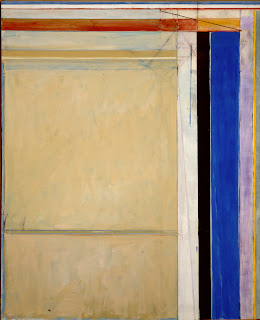 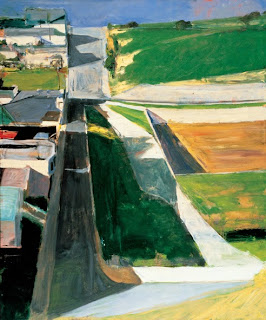 Notes to myself on beginning a painting

1.   Attempt what is not certain. Certainty may not come later. It may be then be a valuable delusion.
2.   The pretty, initial position, which falls short of completeness, is not to be valued-except as a
stimulus for further moves.
3.   Do search. But in order to find other than what is searched for.
4.   Use and respond to the initial fresh qualities, but consider them absolutely expendable.
5.   Don't "discover" a subject-of any kind.
6.   Somehow don't be bored-but if you must, use it in action. Use just destructive potential.
7.   Mistakes can't be arranged, but they move you from your present position.
8.   Keep thinking about Pollyanna.
9.   Tolerate chaos.
10. Be careful only in a perverse way. 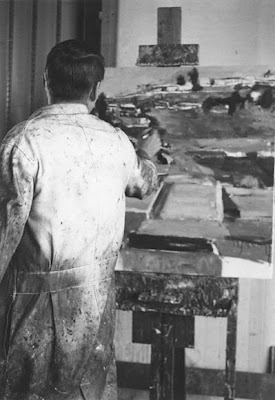 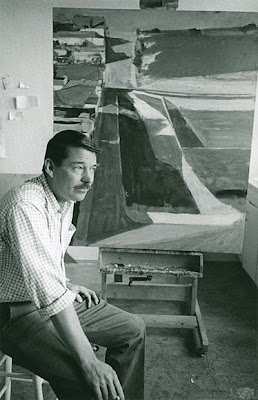 I'm recommending one of my personal favorites, the Art Authority at the bottom of the post. You can zoom in and really see these pantings close-up. - Ken 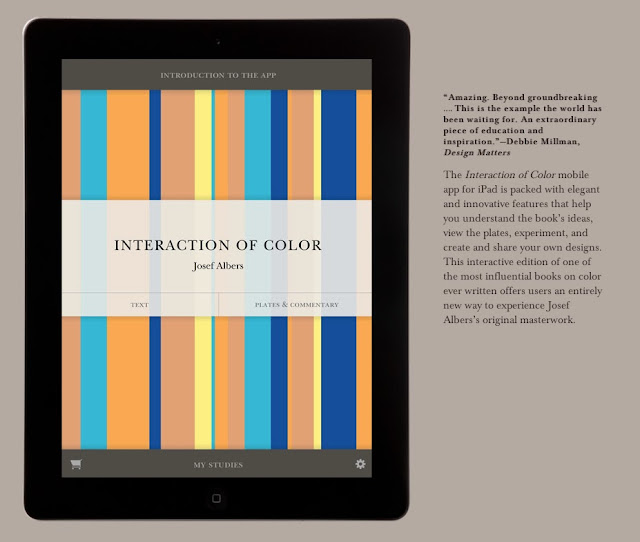 
This year is the golden anniversary of a classic art-education text, “Interaction of Color,” by Josef Albers, a Bauhaus artist who left Germany for the United States in 1933. His influential book of color theory was originally published by Yale University Press as a limited silk-screen edition in 1963 and became a paperback in 1971. Now, INTERACTION OF COLOR has arrived as an engaging immersive iPad app (one chapter free to try; $9.99 for the full app).

Color theory also comes into play in VAN GOGH’S DREAM ($9.99 for iPad), an inventive multi­media biography of the artist and his techniques. Text, high-resolution images, digitized letters, dynamic maps and video clips from experts at the Van Gogh Museum in Amsterdam combine to recount the life of the volatile Dutch ­Post-­Impressionist.

As with any solid educational app, “Van Gogh’s Dream” shows as well as it tells. In the section about his methods, the text explains: “To create a harmonious painting, yet exaggerating the hues to enhance their power of expression, van Gogh used his own formula based on a play of contrasts between complementary colors.” A touch-sensitive chromatic wheel on the same screen lets users instantly change the hues on a sample canvas to see the effects of color contrast in action. (Although this app is currently iPad-only, van Gogh enthusiasts toting Android devices can get a biography and 800 photographs of his paintings with the free VAN GOGH GALLERY app.)

As great as tablets can be for touch-based actions, today’s sharp color screens also show off detailed photographs and images quite nicely. For students and art lovers looking for a general guide that doesn’t strain the shoulder, there’s ART AUTHORITY ($9.99 for iPad; $4.99 for iPhone and Kindle Fire), featuring the work of more than 1,000 major Western artists from ancient to contemporary times.
The app’s overall visual design isn’t particularly original: tappable paintings on a museum wall lead to eight different historical art periods. But it conveniently rounds up images of some 65,000 paintings and sculptures, and information related to them. Images can be expanded to full-screen views for greater appreciation. Earnest (but not infallible) background particulars and artist biographies come courtesy of Wikipedia.

True, apps can’t replace the experience of gazing at art in person. They can, however, bring art closer to the curious in other ways.

Posted by Ken Elliott at 6:24 PM No comments:

Yes, I am a full-time artist, but in the summer of 2013 I published a book about manifesting and the law of attraction. It's off to a very fast start selling hundreds of copies in a few weeks!

I learned from the best teachers and had some amazing experiences and results that I shared with my friends. People that had been studying and practicing manifesting for decades told me I had new an important information. Further, they said I presented as simply as they have ever heard it done. 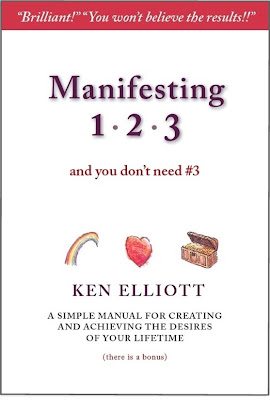 This is not an ordinary manifesting or law of attraction book. This book contains critical new information that allows anyone to successfully and confidently bring good things into their lives. As an artist, it is my secret success weapon!

This book is THE basic manual for manifesting and attraction, the go-to book easily explained with fascinating success stories.

It's a nice thing to quickly sell a number of books but more importantly, I'm getting a flood of stories about how effective and how simple this process is. I was taught by the very best on the subject and I am passing it on to you as the go-to manual on the process. I have to admit, I've been very successful at manifesting good things in my life and it's one of the secrets to my success as an artist.

Every time I do an art class or lecture I add the information in the book to the event. I've had a lot of favorable comments from my fellow artists, so I want to pass everything along to you. This is an art, not author blog, so if you want to follow the developments and stories resulting from this book, please use the links below. Only on rare occasions will I post recent developments or stories regarding manifesting  to this art blog.

Ken was recently interviewed on these these radio shows:

Listen to recent radio interviews archived:
Come at Get it Radio with hosts Wayne and Kelly
November 2013

Two hours of Manifesting 123 in detail. Ken discusses how he learned thought is real. Each time he sent something in thought, his gifted friends would see it form up on the other side - in spirit. A caller explains how she used the Manifesting 123 techniques to quickly find the money necessary to move from California and start a new life and career in Colorado. Did anyone say Las Vegas?
listen / download

The Ronnie McMullen Show
July 27, 2013
listen / download
In this interview you will hear me describe manifesting at its core. I have an incredible personal story demonstrating how manifesting really works - it's not just hoping for a good result. I describe how your thoughts actually form up. It changes everything.

The Manifesting123 website
To order the signed 136 page paperback or download in all ebook versions
sign up for Ken's Manifesting 123 bi-weekly newsletter with new stories and comments
Manifesting 123 on Facebook
Ken's author/book info and reviews on Amazon.com

This is brilliant! Ken not only learned about manifesting, he changed his own life using the techniques you will learn here. The simple and profound gift of this book could only come from a masterful ability to teach what took him many years to learn. Begin changing your life today. --Judy Goodman, CPC, CSRC, CRC

Your book is the best I have read, and I do read this subject. Simple, covers all the bases with humour and clarity. Great job! Great resource and I thought I was 'done'--not quite it seems, so thanks! --Emily and Ted from Canada

Of all the Law of Attraction books, films etc. that I've tried, this works the best and the quickest.
Margaret

"Ken's book is simple, to the point and, compared to others I have read, the easiest manifesting book to use. He took me on an elegant, successful journey."Jan D., publisher, artist, Larkspur, Colorado

"I LOVED your talk and am so amazed and inspired by the miracles you make everyday!! I am SO VERY excited to read your book and tell the world about it!
Rod, Omaha, Nebraska

"I have known about visualizing our way to a higher, improved and happier life, but I was never very good and would just give up on it after a short time. Then Ken Elliott taught me his Manifesting 1,2,3! Ken makes it easy. You stick with it and magic happens! You won't believe the results!
K.M., Denver

"Ken is an engaging, personable speaker with terrific stories that illustrate just how simple and straightforward it is to create. Do not miss him when he speaks. Invest in your life, please. Buy Ken's book."
E., Canada. 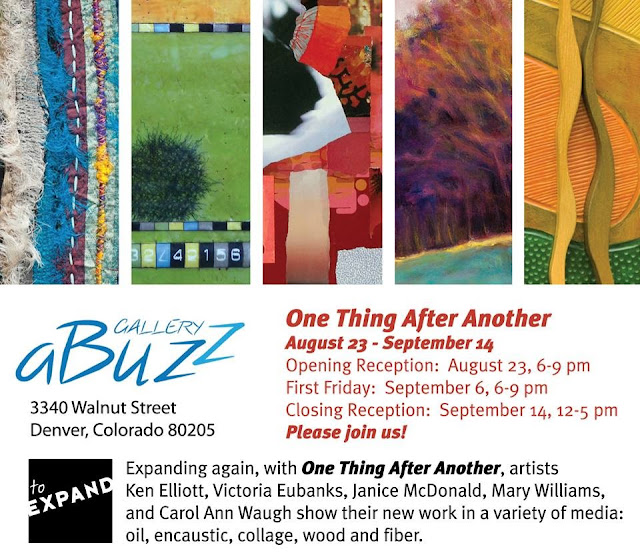 Here is something fun from SamArtDog's blog:
http://samartdog.blogspot.com
Thanks for the fun Sam.

Is this what alternating current looks like?
Posted by Ken Elliott at 7:16 PM 2 comments: 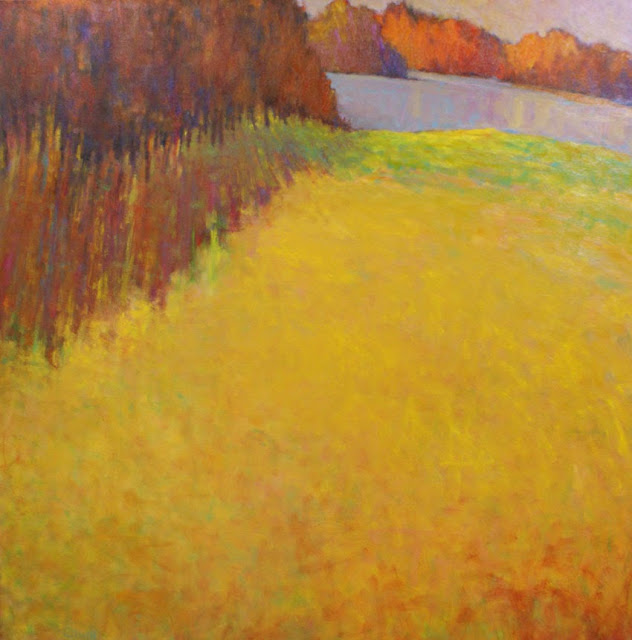 Thank you Debbrah!
Posted by Ken Elliott at 7:02 PM No comments:

New Oil: Heat in the back of the Forest 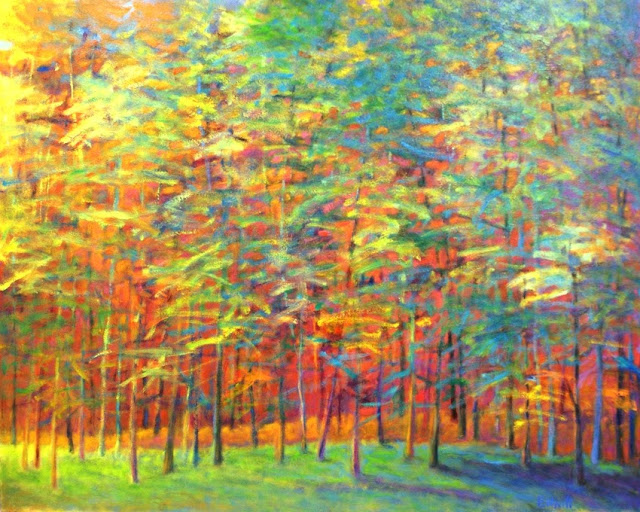 This oil is a result of a dramatic move.  There is a previous oil that was a red background and yellow trees in front.  I wasn't happy with the shapes of the original yellow trees - they were too much alike and too predictable.

After viewing the original oil for about 6 months, I took the oils left on my palette after a painting session and scrubbed them over the top of the yellow trees. Once they were obliterated, I felt much better and widened my options to make a better painting. Now I had a painting to solve... a happy situation and not a dead-ended one.

It took four more painting sessions to bring it to completion. The entire endeavor was a bit of school for me and I was thrilled by the process.
Posted by Ken Elliott at 7:34 PM 2 comments: 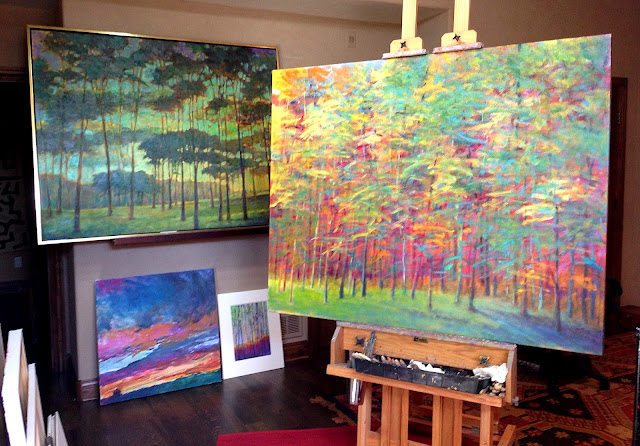 Here are some works in the studio this week. The large canvases are 3 x 5 feet each and both oils have been around awhile. The one at the upper left was started / finished about 3-4 years ago. From time to time I would rework it, improving it each time, but never taking it as far as I hoped. As I improved as an artist, I could bring more experience to the canvas and now is is almost complete. I'm very happy with this version and much has been learned along the way.

The work on the easel was once a finished work that looked very different from what you see now. The original image needed more strength so I scumbled over the entire top half of the canvas with arbitrary colors to make a new stand of trees, letting the original red background show through in places. It became a much stronger image instantly but not a very believable one.

Then a wonderful thing happened. The same thing is happening to the cloud canvas on the floor. left. I wasn't sure what to do next with these works but I left them out for viewing. When I into the studio fresh in the mornings  I was surprised to see that the paintings had improved. They were painting themselves! I simply put a little distance between my expectations and the works as they actually are. Now I can better decide what is good about the work and what needs more attention.

I hope you have a number of good works busily painting themselves as well !
Posted by Ken Elliott at 7:17 AM 2 comments: