A Santa Secret for You and a Miraculous Story 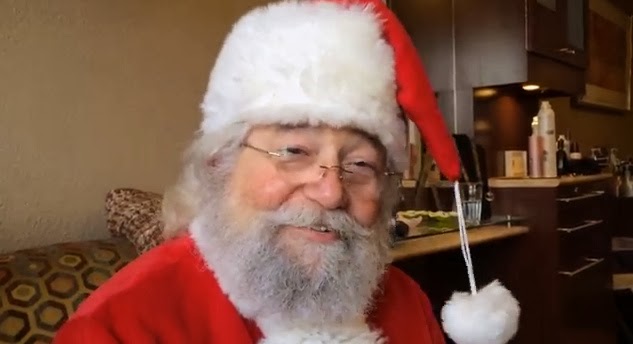 Funny, I had been wanting to get my picture taken with Santa this year and it had been over 50 years since the last one. I was thinking about just how to do it. I could go to the Mall, but I wouldn't. The Santa photo just kept coming up. It was a thought and a wish of sorts, but not something I was really working on.
Within a week I found out that a Santa would be where I get my hair cut. I was all in! So last Saturday I want to see the owner Paul and got my photo taken with Santa. What fun!

As it so often happens, I got much more than I bargained for. Santa was Dr. Mike Rudnick, a delightful man. Since we had time to chat, he told me a Santa secret, VERY cool and I asked him what he wanted. He was much surprised, since that is usually his role. He said that no one had ever asked Santa that question before. We had a great time and yes, I did get my picture taken and Santa got a Manifesting 123 book so polish up his wishes with. It was all great fun and I'd recommend meeting up with Santa much sooner than every 50 years or so.
Santa told me a wonderful story. It's about a very young girl in Juarez, Mexico that was very sick. Many prayers were offered for this little girl and there was a marvelous result. Dr. Rudnick and his wife are a part of a church group that goes to Juarez in the summers, volunteering services to those in need there. As he mentions in the video, "It is different there." This young girl was threatened my an illness that would not be fatal in the US and she could easily get treatment in a US hospital. Unfortunately, access to the proper drug or a Juarez hospital were possible and this little girl had precious little time to live when Dr. Rudnick saw her.

Santa tells the story in his 6.5 minute video here. Remember, Santa has a cool secret to share!

Thank you, Santa for allowing me to film and pass on your story. Thank you as well Paul, owner of the Spellbound Salon for fixing me up with Santa. Sweet!


It just occurred to me that not only have I had a wonderful year, but somehow manifested Santa himself. Hmmm... look at what we can do!Thank you all for your support of this little big Manifesting book, your stories, and for passing the word on to your friends. Good things have happened, lives have been changed and joy is in the air. I wish that all your beautiful dreams, prayers, wishes and intentions come true with sugar plums on top!
Most sincerely,
Ken

Fine art
Author of Manifesting 123 and you don't need #3

Do you have a story of your own where an intention came true? Send it to Ken
Posted by Ken Elliott at 9:07 AM No comments: 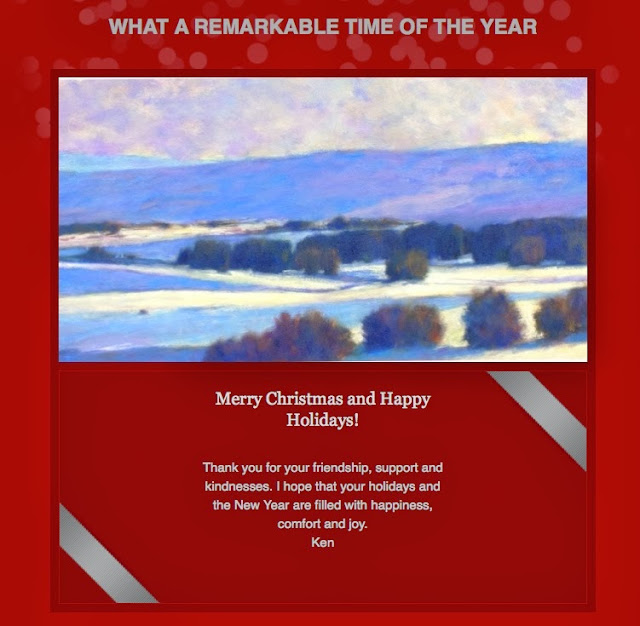 Art in Film: A little film companion to the recent film Gravity

I couldn't resist passing on this out of the box idea, a treat for those that have seen the movie "Gravity."  Click to play

This story first appeared in the Nov. 29 issue of The Hollywood Reporter magazine.

The idea for Aningaaq, which follows an Inuit fisherman stationed on a remote fjord in Greenland, occurred to the Cuarons as they were working out the beats for the Gravity screenplay "It's this moment where the audience and the character get this hope that Ryan is finally going to be OK," Jonas, 31, tells THR. "Then you realize that everything gets lost in translation.”

Both Cuarons spent time in the glacial region (Alfonso once toyed with setting a movie there) and fell in love with the barren vastness of its frozen wilderness. During one of those visits, Alfonso met a drunken native who would become the basis for the title character, played by Greenland's Orto Ignatiussen. But it wasn't until Jonas, on a two-week trek gathering elements for his film, was inspired by the local inhabitants' profound attachment to their sled dogs that he decided to incorporate that element into the plot.

The short was filmed "guerrilla style" on location on a budget of about $100,000 -- most of which went toward the 10-person crew's travel costs -- and Cuaron completed it in time to meld the dialogue into Gravity's final sound mix. The result is a seamless conversation between Aningaaq and Ryan, stranded 200 miles above him, the twin stories of isolated human survival providing thematic cohesion. Still, Jonas says he was careful "to make it a piece that could stand on its own." Should both get Oscar noms, an interesting dynamic would emerge: Two films potentially could win for representing different sides of one conversation, to say nothing of having come from father and son.
Posted by Ken Elliott at 11:34 PM No comments: 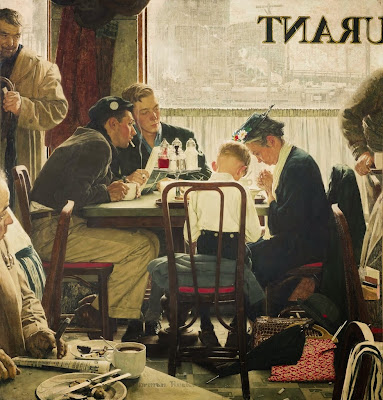 .Norman Rockwell's "Saying Grace" appeared on the cover of the Saturday Evening Post on Nov. 24, 1951

From the NY Times:

Three of Norman Rockwell’s best-known paintings of homey, small-town America, which are among the most popular of the artist’s Saturday Evening Post covers, sold at Sotheby’s American Art auctionon Wednesday morning for a total of more than $57 million.

The final price for “Saying Grace,” considered Rockwell’s masterpiece, was $46 million, after nine and a half minutes of spirited bidding. The painting, which depicts a crowded restaurant with a boy and an old woman bowing their heads in prayer, sold for more than double its high estimate, and far more than the $15.4 million price another Rockwell brought in 2006. The image had topped a Saturday Evening Post readers’ poll in 1955, four years after it was painted. (The artist was paid $3,500 for the painting — about $30,500 when adjusted for inflation.)
Another favorite, “The Gossips,” a finger-wagging montage that included Rockwell’s friends, neighbors and even the artist himself, painted in 1948, sold for $8.45 million. (When the Saturday Evening Post cover ran on March 6, 1948, the magazine was flooded with inquiries from readers wanting to know what the heads were gossiping about.)
The third major painting in the sale, “Walking to Church,”brought $3.2 million and was purchased by Rick Lapham, an American paintings dealer, on behalf of a client. Mr. Lapham was one of only two bidders for the painting. It appeared on the cover of the Saturday Evening Post in 1953, and was based on the Vermeer painting “The Little Street.” Rockwell translated the scene to his own urban street setting, depicting family members in their Easter best, each clutching Bibles, from a composite of different buildings in Troy, N.Y., and a church steeple in Vermont.
Asked why there was not more competition for the painting, Mr. Lapham replied, “It’s stylistically different,” referring to Rockwell’s translation of an old master painting.
The paintings had belonged to the magazine’s longtime art director, Kenneth J. Stuart, who received them as presents from the artist. They were being sold by his three sons.