I'm looking forward to my first solo exhibit at the Mirada Gallery. Here are a few of the new oils to preview the show and you can view the entire exhibit here

There will be a variety of new works including a new series, Saccades and four 24x24 oils on panels. Perhaps I'll see you there!

Article: Why a desperate scheme in World War I turned Allied boats into wacky Cubist artworks

Sinking an enemy ship once had an air of decorum. When World War I erupted, rules of engagement said that the crew of a U-boat would board a cornered ship and offload passengers safely before sending it to slumber on the ocean bed.

But German submarines had become a major threat to the might of the previously dominant British Royal Navy, and neither side could afford niceties. Unterseeboots were terrifyingly good at avoiding detection and were armed with torpedoes — which they weren’t afraid to use. The British fleet was bleeding. Then, in late 1917, something peculiar started happening on the high seas. When U-Boat crew members swiveled their periscopes toward enemy vessels, they discovered the ships had morphed into Cubist artworks. The experiment was called “dazzle camouflage,” and was masterminded by British lieutenant Norman Wilkinson, who also happened to be a talented painter. Although it was impossible to hide the hulking ships, Wilkinson theorized that they didn’t need to.

The wacky paint job made use of high-contrast shapes to obscure its edges, disguise the bow and stern, and confuse the enemy about the boat’s orientation and distance. The enemy navigator would then theoretically miscalculate where the U-Boat would need to relocate to be within firing range, and end up unable to damage the ship.

The USS West Mahomet in port, circa November 1918. (Library of Congress)

The HMS Argus, a British aircraft carrier, circa late 1918. An R class battleship is in the distance. (U.S. Naval History and Heritage Command) The USS Siboney. The crew fires from the port side gun during target practice in August 1918. The stripes on its barrel are part of the ship’s dazzle camouflage pattern. (John G. Krieger/U.S. Naval History and Heritage Command) The British steamship City of Glasgow, torpedoed in the Irish Sea on Sept. 1, 1918. Photographed from USS Beale, which rescued the crew before the steamer sank at 2:40 p.m. Note the ship’s dazzle camouflage. (U.S. Naval History and Heritage Command) After the United States entered the war, it similarly experimented on thousands of ships with defensive paint schemes, calling its version “razzle dazzle.” One type, the “Mackay Low Visibility System,” was based on the idea that such high contrast would be so overwhelming to the optic nerves that the ship would not even be perceived, according to the Naval History and Heritage Command. The most popular tactic involved painting a wave on the side of ships to deceive the enemy about which direction the boat is going. Increasing the size of the painted wave could also give the impression that the ship was smaller than it actually was. A wide variety of patterns was necessary to keep the captains from learning them, according to “A Genius for Deception: How Cunning Helped the British Win Two World Wars.”

Outfitting a ship with painted camouflage was relatively inexpensive and convenient. Each shipping port was outfitted with a crew of four to five camofleurs that made the transformation possible within a day, said Claudia Covert of the Rhode Island School of Design.

It’s hard to say how effective dazzle camouflage really was, because it was often implemented in concert with other defensive features. After the war ended, sensor technology and optics improved so boats were repainted, and now the photographs are all that remain. Workers make models of merchant ships and warships, for testing new patterns of dazzle painting or other camouflage. A chart in the background shows various ship silhouettes. This photograph is dated Feb. 10, 1919, but is believed to have been taken at least several months earlier. (U.S. Naval History and Heritage Command) Models of the British passenger liner Mauritania demonstrate the effects of dazzle camouflage in comparison with a plain gray color scheme in 1918. (U.S. Naval History and Heritage Command)

The USS Wakulla at a wharf with its crew members, possibly when the ship was first commissioned in June 1918. (U.S. Naval History and Heritage Command)

May-Ying Lam is a photo editor at The Washington Post.
Posted by Ken Elliott at 4:51 AM No comments: 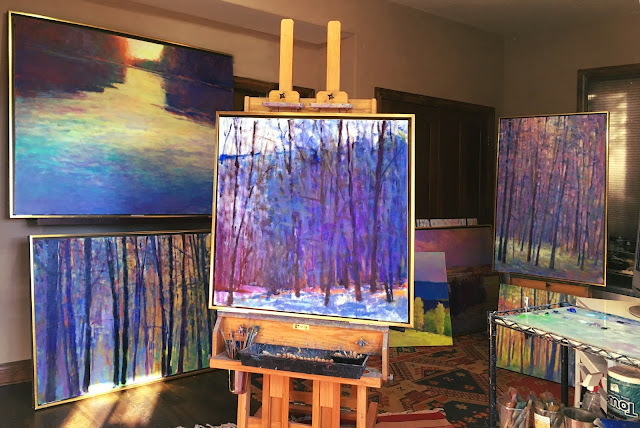 Here are some of the oils in progress from today.

At the upper left is a 4x5 oil that may be complete. It seems to be in good shape, but I've perched it on the wall to keep a close eye on it. The idea is to keep it fresh and not work on it just to stay busy. So far my 'dialogue' with the work tells me there isn't anything left to do.

Just below that on the floor, left is a 3 x 5 oil that was painted over a previous oil that came to a dead end. I kept that canvas around for about 3 years and this week I finally painted over it with a new idea. The composition sprang from the  finished 24 x 24 oil on the floor, right. The 3 x 5 looks very spontaneous - it was, and I'm inclined do a few small things and declare it worth art!

On the easel is a recent theme that sprang from a pastel demonstration for the Colorado Pastel Society recently. This 36 x 36 oil represents a good start and once it dries for a few days, I'll eagerly continue it.

On the easel back right is a 30 x 48 oil that has been in progress for about a month. I'm just adding a few things from time to time and enjoying the incremental progress. It's so easy to overwork something like this (I can be the expert at that) so I'm much aware of avoiding that trap.

Now that I think of it, the entire studio is a representation of a number of good starts and overworking is nowhere to be seen.

This is the beauty of having a large number of works in progress because I never feel pressured to finish that One. There is always another start to make or another canvas that calls out for attention.

I'll be back in the studio again today to create more puzzles and bring some of these oils to completion.
Posted by Ken Elliott at 8:27 AM No comments: